We have known for a while that it was only a matter of time before the world started learning about Santa Teresa, Playa Hermosa and Mal Pais. Now that this top 10 list of hot places to visit in 2015 has been published in not only Conde Naste but, Fox news too, the cat is truly out of the bag. 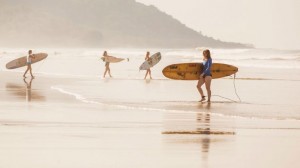 Yesterday saw the beginning of one of the worlds hardest endurance races La Ruta De Los Conquistadores. Read my article about the three day mountain bike stage race, in this weeks Inside Costa Rica…..

I have recently started writing for Inside Costa Rica, an English speaking online newspapar based in San Jose. I will be focusing on llifestyle and tourism with a special slant on the Nicoya Peninsula.

My guests are often asking me for suggestions of a good family hotel if they are spending a few nights in San Jose. I think I have found one! It is Villas Del Rios. It is made up of apartments, great value apartments and I really recommend it. There is a 24hr mini supermarket, two swimming pools, a gym and kids play area. We loved it. Here’s their website.

We have just got back from our trip home to the UK. We missed the big earthquake in September..and whilst I was thankful of that, I also was curious about the strength of it. I didnt have to worry as we had a 6.6 on Tuesday night. Now I know!

Sloths are my favourite animal. I have yet to meet one but I am learning interesting things about them.

Did you know that they are officially the slowest mammals on the planet and that they give birth upside down?

Well, now you do.

For the best chance to meet a sloth, head over to Puerto Viejo on the South Caribbean where you will find the only sloth resue centre in the world.

I am proud to annouce that our beaches of Mal Pais and Santa Teresa have received their 2012 Blue Flag.

The Blue Flag Ecological Program was created in response to the imminent dangers of beach pollution, its repercussions on public health and the tourism industry. It has reached its twelfth year of operations, with a marked increase that began in 2002.

Besides being a program that has managed to coordinate efforts between various institutions involved, it also allows citizen participation and our local community and its businesses have all played their part in ensuring we meet the necessary standards required.

The Ecological Blue Flag is granted annually to those communities and local schools that have reached, at a minimum, 90% of that which is required by the end of the year. In the case of coastal communities that belong to the Blue Flag program, additional efforts will be recognized for two and now even four stars if they make efforts in other considered areas to achieve overall development, within the proposed focus.

One of my favourite places to eat in Santa Teresa is Milarepa where chef Sebastian makes awesome dishes each night. Set within the picturesque beachfront location of Milarepa Hotel, you are served some culinary wonders that change daily dependant on the local fresh produce of that day. Amazing tropcial dishes with fish, meats and local fruits and vegetables are then topped off with equally devine desserts. To make a reservation please call + 506 2640 0023. www.milarepahotel.com

Pretty much everyone coming to Costa Rica will be spending at least one night in the capital city. San Jose is sprawling network of fast moving roads and toll booths but it is also full of small and interesting areas. You just need to know where to find them.
Whether you are flying in of an afternoon, and setting off again tomorrow, or in search of the cool spots in San Jose, here are my suggestions for differing budgets.

END_OF_DOCUMENT_TOKEN_TO_BE_REPLACED

We are in the jungle. Insects here are amazing and the kids really love it. This is one of the most biodiverse regions in Central America and you’ll see all sorts. But here’s the thing, Insects don’t like us and tend to want to be left alone. Progress has cleared so much of the jungle that they are not hiding behind every corner waiting for you. You would have to be unlucky to get stung or bitten. All of us have been bitten and we promise if you have been bittern by an English wasp in summer its far worse and more painful than a scorpion sting here.  Or your money back.

What You Need to Know

What You Need to See